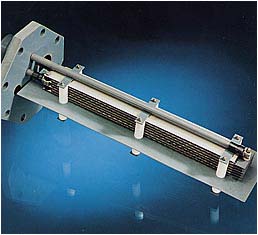 The hypochlorite ion, also known as chlorate(I) anion is ClO−. A hypochlorite compound is a chemical compound containing this group, with chlorine in oxidation state +1.

Electrocoagulation is usually considered a water treatment technology that utilizes an electrode to ionize water molecules and separate dissolved ions (impurities) from water. It differs from other water purification technologies in that it is done without the use of chemicals and is usually a tertiary treatment to reverse osmosis (RO).

What It Does: An important application for electrodeionization is the production of pure water and ultrapure water. In EDI, the purifying compartments and sometimes the concentrating compartments of the electrodialysis stack are filled with ion exchange resin. When fed with low TDS feed (e.g., feed purified by RO), the product can reach very high purity levels (e.g., 18 Megohms). The ion exchange resins act to retain the ions, allowing these to be transported across the ion exchange membranes. The main usage of EDI systems such as those supplied by Ionpure or SnowPure are in electronics, pharmaceutical, power generation, and cooling tower applications.

How It Works: An electrode in an electrochemical cell is referred to as either an anode or a cathode, terms that were coined by Michael Faraday. The anode is defined as the electrode at which electrons leave the cell and oxidation occurs, and the cathode as the electrode at which electrons enter the cell and reduction occurs. Each electrode may become either the anode or the cathode depending on the voltage applied to the cell. A bipolar electrode is an electrode that functions as the anode of one cell and the cathode of another cell. Each cell consists of an electrode and an electrolyte with ions that undergo either oxidation or reduction. An electrolyte is a substance containing free ions that behaves as an electrically conductive medium. Because they generally consist of ions in solution, electrolytes are also known as ionic solutions, but molten electrolytes and solid electrolytes are also possible. They are sometimes referred to in abbreviated jargon as lytes. Water is passed between an anode (positive electrode) and a cathode (negative electrode). Ion-selective membranes allow the positive ions to separate from the water toward the negative electrode and the negative ions toward the positive electrode. High purity deionized water results.

Effects on pH: Electrodeionization can have a marked effect on the pH of the solution as well. pH is a measure of the acidity or alkalinity of a solution. Aqueous solutions at 25 °C with a pH less than 7 are considered acidic, while those with a pH greater than 7 are considered basic (alkaline). When a pH level is 7.0, it is defined as 'neutral' at 25 °C because at this pH the concentration of H3O+ equals the concentration of OH− in pure water. pH is formally dependent upon the activity of hydronium ions (H3O+),(H+ is often used as a synonym for H3O+.)