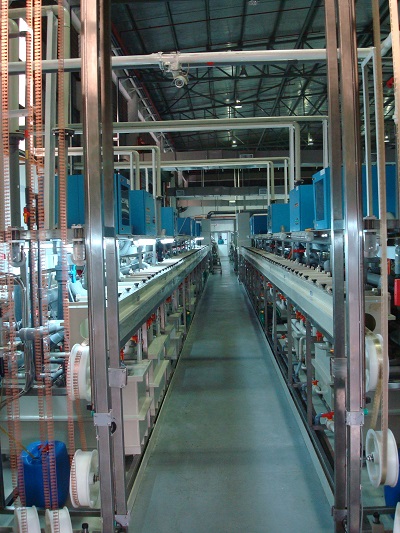 Amstel Rectifiers have been used for more than 20 years in plating machines, it is the successor of the TREDF Rectifiers, we have more than 25.000 rectifiers sold to the electronic production industries for EPL and Reel to Reel machines.

Electroplating is a plating process in which metal ions in a solution are moved by an electric field to coat an electrode. The process uses electrical current to reduce cations of a desired material from a solution and coat a conductive object with a thin layer of the material, such as a metal. Electroplating is primarily used for depositing a layer of material to bestow a desired property (e.g., abrasion and wear resistance, corrosion protection, lubricity, aesthetic qualities, etc.) to a surface that otherwise lacks that property. Another application uses electroplating to build up thickness on undersized parts.

The process used in electroplating is called electrodeposition. It is analogous to a galvanic cell acting in reverse. The part to be plated is the cathode of the circuit. In one technique, the anode is made of the metal to be plated on the part. Both components are immersed in a solution called an electrolyte containing one or more dissolved metal salts as well as other ions that permit the flow of electricity. A power supply supplies a direct current to the anode, oxidizing the metal atoms that comprise it and allowing them to dissolve in the solution. At the cathode, the dissolved metal ions in the electrolyte solution are reduced at the interface between the solution and the cathode, such that they "plate out" onto the cathode. The rate at which the anode is dissolved is equal to the rate at which the cathode is plated, vis-a-vis the current flowing through the circuit. In this manner, the ions in the electrolyte bath are continuously replenished by the anode.

Other electroplating processes may use a non-consumable anode such as lead. In these techniques, ions of the metal to be plated must be periodically replenished in the bath as they are drawn out of the solution. The most common form of electroplating is used for creating coins such as pennies, which are small zinc plates covered in a layer of copper.

Electroplating of a metal (Me) with copper in a copper sulfate bath.

The anode and cathode in the electroplating cell are both connected to an external supply of direct current — a battery or, more commonly, a rectifier. The anode is connected to the positive terminal of the supply, and the cathode (article to be plated) is connected to the negative terminal. When the external power supply is switched on, the metal at the anode is oxidized from the zero valence state to form cations with a positive charge. These cations associate with the anions in the solution. The cations are reduced at the cathode to deposit in the metallic, zero valence state. For example, in an acid solution, copper is oxidized at the anode to Cu2+ by losing two electrons. The Cu2+ associates with the anion SO42- in the solution to form copper sulfate. At the cathode, the Cu2+ is reduced to metallic copper by gaining two electrons. The result is the effective transfer of copper from the anode source to a plate covering the cathode. The plating is most commonly a single metallic element, not an alloy. However, some alloys can be electrodeposited, notably brass and solder.

Many plating baths include cyanides of other metals (e.g., potassium cyanide) in addition to cyanides of the metal to be deposited. These free cyanides facilitate anode corrosion, help to maintain a constant metal ion level and contribute to conductivity. Additionally, non-metal chemicals such as carbonates and phosphates may be added to increase conductivity. When plating is not desired on certain areas of the substrate, stop-offs are applied to prevent the bath from coming in contact with the substrate. Typical stop-offs include tape, foil, lacquers, and waxes.

Initially, a special plating deposit called a "strike" or "flash" may be used to form a very thin (typically less than 0.1 micrometer thick) plating with high quality and good adherence to the substrate. This serves as a foundation for subsequent plating processes. A strike uses a high current density and a bath with a low ion concentration. The process is slow, so more efficient plating processes are used once the desired strike thickness is obtained.

The striking method is also used in combination with the plating of different metals. If it is desirable to plate one type of deposit onto a metal to improve corrosion resistance but this metal has inherently poor adhesion to the substrate, a strike can be first deposited that is compatible with both. One example of this situation is the poor adhesion of electrolytic nickel on zinc alloys, in which case a copper strike is used, which has good adherence to both.

A closely related process is brush electroplating, in which localized areas or entire items are plated using a brush saturated with plating solution. The brush, typically a stainless steel body wrapped with a cloth material that both holds the plating solution and prevents direct contact with the item being plated, is connected to the positive side of a low voltage direct-current power source, and the item to be plated connected to the negative. The operator dips the brush in plating solution then applies it to the item, moving the brush continually to get an even distribution of the plating material. Brush electroplating has several advantages over tank plating, including portability, ability to plate items that for some reason cannot be tank plated (one application was the plating of portions of very large decorative support columns in a building restoration), low or no masking requirements, and comparatively low plating solution volume requirements. Disadvantages compared to tank plating can include greater operator involvement (tank plating can frequently be done with minimal attention), and inability to achieve as great a plate thickness.

In principle any water-based reducer can be used although the redox potential of the reducer half-cell must be high enough to overcome the energy barriers inherent in liquid chemistry. Electroless nickel plating uses hypophosphite as the reducer while plating of other metals like silver, gold and copper typically use low molecular weight aldehydes.

A major benefit of this approach over electroplating is that power sources and plating baths are not needed, reducing the cost of production. The technique can also plate diverse shapes and types of surface. The downside is that the plating process is usually slower and cannot create such thick plates of metal. As a consequence of these characteristics, electroless deposition is quite common in the decorative arts.

Cleanliness is essential to successful electroplating, since molecular layers of oil can prevent adhesion of the coating. ASTM B322 is a standard guide for cleaning metals prior to electroplating. Cleaning processes include solvent cleaning, hot alkaline detergent cleaning, electro-cleaning, and acid treatment etc. The most common industrial test for cleanliness is the waterbreak test, in which the surface is thoroughly rinsed and held vertical. Hydrophobic contaminants such as oils cause the water to bead and break up, allowing the water to drain rapidly. Perfectly clean metal surfaces are hydrophilic and will retain an unbroken sheet of water that does not bead up or drain off. ASTM F22 describes a version of this test. This test does not detect hydrophilic contaminants, but the electroplating process can displace these easily since the solutions are water-based. Surfactants such as soap reduce the sensitivity of the test and must be thoroughly rinsed off.

Although it is not confirmed, the Parthian Battery may have been the first system used for electroplating.

Modern electrochemistry was invented by Italian chemist Luigi V. Brugnatelli in 1805. Brugnatelli used his colleague Alessandro Volta's invention of five years earlier, the voltaic pile, to facilitate the first electrodeposition. Brugnatelli's inventions were suppressed by the French Academy of Sciences and did not become used in general industry for the following thirty years.

By 1839, scientists in Britain and Russia had independently devised metal deposition processes similar to Brugnatelli's for the copper electroplating of printing press plates.

Boris Jacobi in Russia not only rediscovered galvanoplastics, but developed electrotyping and galvanoplastic sculpture. Galvanoplastics quickly came into fashion in Russia, with such people as inventor Peter Bagration, scientist Heinrich Lenz and science fiction author Vladimir Odoyevsky all contributing to further development of the technology. Among the most notorious cases of electroplating usage in mid-19th century Russia were gigantic galvanoplastic sculptures of St. Isaac's Cathedral in Saint Petersburg and gold-electroplated dome of the Cathedral of Christ the Saviour in Moscow, the tallest Orthodox church in the world.

Soon after, John Wright of Birmingham, England discovered that potassium cyanide was a suitable electrolyte for gold and silver electroplating. Wright's associates, George Elkington and Henry Elkington were awarded the first patents for electroplating in 1840. These two then founded the electroplating industry in Birmingham from where it spread around the world.

The Norddeutsche Affinerie in Hamburg was the first modern electroplating plant starting its production in 1876.

The plating industry received a big boost from the advent of the development of electric generators in the late 19th century. With the higher currents, available metal machine components, hardware, and automotive parts requiring corrosion protection and enhanced wear properties, along with better appearance, could be processed in bulk.

One of the American physicist Richard Feynman's first projects was to develop technology for electroplating metal onto plastic. Feynman developed the original idea of his friend into a successful invention, allowing his employer (and friend) to keep commercial promises he had made but could not have fulfilled otherwise.

Electroplating is a useful process. It is widely used in industry for coating metal objects with a thin layer of a different metal. The layer of metal deposited has some desired property, which metal of the object lacks. For example chromium plating is done on many objects such as car parts, bath taps, kitchen gas burners, wheel rims and many others.

A zinc solution tested in a hull cell.

The Hull cell is a type of test cell used to qualitatively check the condition of an electroplating bath. It allows for optimization for current density range, optimization of additive concentration, recognition of impurity effects and indication of macro-throwing power capability. The Hull cell replicates the plating bath on a lab scale. It is filled with a sample of the plating solution, an appropriate anode which is connected to a rectifier. The "work" is replaced with a hull cell test panel that will be plated to show the "health" of the bath.

The Hull cell is a trapezoidal container that holds 267 ml of solution. This shape allows one to place the test panel on an angle to the anode. As a result, the deposit is plated at different current densities which can be measured with a hull cell ruler. The solution volume allows for a quantitative optimization of additive concentration: 1 gram addition to 267 mL is equivalent to 0.5 oz/gal in the plating tank.